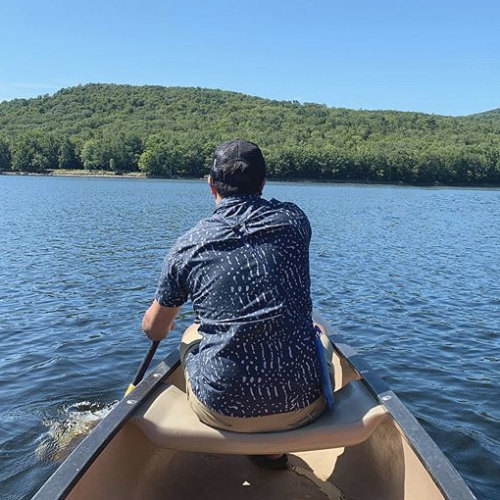 With pre-order launching today, crunchy climbing shoe maker Evolv has released the all-new Ashima x Brain Dead Zenist collaboration unisex shoe—one heck of a design-driven gift for us quarantined climbers dreaming of the day we can return to our climbing communities, foreign crags, and local gyms—with 100% of profits from the pre-sale going to a number of grassroots organizations that provide marginalized communities access to climbing.

If you're into climbing and not familiar with Ashima Shiraishi then you've probably been living under a rock (forgive the pun) for the past handful of years. The 19 year old crusher from New York City began climbing at age six on Rat Rock in Central Park. A major milestone came at age 15 when she became both the youngest and first female climber to climb V15 with her send of Horizon on the island of Kyushu in Japan.

Climbing shoe company Evolv, founded by Asian American Brian Chung, has been an early supporter of Ashima's climbing career and even worked with her to develop a pro model shoe bearing her name. The two have come together again on a second signature shoe for the brand's 2021 lineup, though this time around they've invited Los Angeles creative collective and streetwear brand Brain Dead, founded and owned by Kyle Ng, to the party. (Ashima and Brain Dead worked together on the recent TNF x Brain Dead collab, too)

The collaboration is so much more than just a great looking shoe. In an effort to make an impact on climbing's lack of diversity, Evolv has committed to donating 100% of all presale profits of the Ashima x Brain Dead Zenist colorway to Adaptive Climbing Group, Young Women Who Crush, Brown Girls Climbing, and Own Your Media. Brain Dead will also be working locally with California's Long Beach Rising to provide workshops, gym memberships, shoes, and climbing trips to underprivileged communities.

Pre-sale for the $160 Zenist shoe is live now and closes on 7/3, so don't miss this opportunity to get a sweet pair of climbing shoes and support some great causes in the climbing space at the same time.

Looking for other rad climbing gear, check out the Field Mag Gear Guide to Indoor and Outdoor Bouldering

The boutique cycling brand is #DoingThings with new aesthetically pleasing collaboration, designed for daily use in the saddle and out