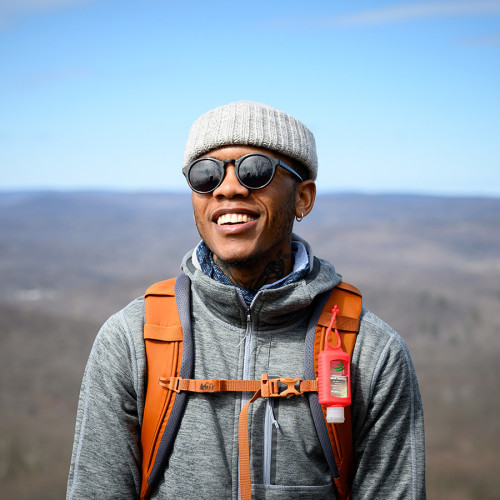 @signedjustin
Justin is a freelance writer, explorer, and all-around student of life currently based in the NYC area.
https://www.fieldmag.com/articles/adventurer-ron-griswell-interview-on-diversity-in-outdoors

From an early age, Ron Griswell had exhibited a natural curiosity for the vast landscapes that lay just off in the distance. By the onset of his undergraduate studies, the call of the mountains would become too great for him to ignore any longer. In 2013, a swift decision to temporarily leave school and set off on a new adventure would forever alter the course of his life.

Now 29, the North Carolina-born explorer has demonstrated himself as a trailblazer in the outdoor industry. Over the past five years, he has completed internships and leadership programs, advocated for public lands, and teamed up with popular brands like Teva and BioLite on campaigns. These days, he can be found on social media feeds directing monthly digital content for Backcountry and inspiring others to embark on their own wild expeditions.

Throughout Griswell’s career thus far, one thing that has remained clearly visible is his positioning as one of the only persons of color in the room.  This recognition propelled him to launch his own initiative, known as HBCUs Outside, in an effort to connect outdoor brands and agencies with predominantly Black institutions and their students, which recruitment efforts often fail to reach.

I recently had the chance to catch up with Ron—an old friend of mine—about his introduction to the outdoor industry, his thoughts on the recent push for more diverse voices within the community, as well as his devotion to providing more resources specifically to Black and Brown communities.

Where does your love from the outdoors come from?

This passion has always been there since I was a little kid. My earliest memory comes from when I was just a toddler, taking road trips with the family. I just remember looking out of the window from the backseat and seeing these mountains as far as the eye could see—the gray, blue and green colors rippling throughout the sky. It used to frustrate me because I couldn’t lift myself out of my car seat to get a better look, and I never forgot how that made me feel. Years later I would find out that we were road tripping along the Blue Ridge Parkway and making stops at some of the overlooks.

Growing up, I also had a fascination with animals, so I would go to the library and rent National Geographic wildlife documentaries instead of books. I spent most of my childhood watching those documentaries, whether it was about the animals specifically, or about the people behind the camera who were getting out and exploring the world. That was amazing to me. I am from a country town, so I would go out and explore the thickets behind my grandmother’s house. They felt massive at the time, but now that I’m older, I realize that it was only about an acre or two. Even still, I felt like the people in those documentaries, getting lost in places I had never seen before.

So it started at that young age, and ever since then there were other bits and pieces of my life that came together to really mold this foundation and passion that I have for the outdoors.

How did you get your start in the outdoor industry?

I was attending North Carolina A&T State University from 2009 to 2012, and at the time I was navigating school just to see where I possibly fit in, but I started to realize that something really important was missing from my life. I remember meeting some guys who were into things like mountain biking and hiking, so I started going out with them, and it finally clicked that just getting outdoors is what I had been missing. That’s when things really started to change for me. I began to realize just how unhappy and unsatisfied I was with my time in school.

I would ask myself, if you could do anything else right now, what would it be?  That’s when, I ended up finding this company in Minneapolis, MN called Wilderness Inquiry [an adventure travel nonprofit promoting inclusion in the outdoors]. They were looking for summer interns and offering free lodging, and that was enough for me. I applied and a few weeks later got the position. At that point, it was fall of 2012 and I was ready to get out of the area as soon as possible, so I reached back out and asked if I could come work during the winter season also. He agreed and asked how soon I could get to Minneapolis, and I told him I’d be there following week.

"I began to realize just how unhappy and unsatisfied I was with my time in school. I would ask myself, if you could do anything else right now, what would it be?"

Telling my mom was the hardest thing ever, but I knew this was something I needed to do. She took it much better than I thought she would, which I was relieved about because I had already accepted the job. In a week’s time I had gotten rid of my car, sold most of my clothes, leased my apartment, and I left North Carolina. It’s crazy how fast it all happened. I was being given this opportunity, somewhere I had never been before, with literally zero experience. It was the first moment that I realized I was on the right path and that I couldn’t imagine doing anything else for the rest of my life. What was going to be me just taking a year off from school turned into three years, and in that time frame I grew so much as a person.

What advice would you offer to someone looking to get involved in the outdoor industry, or to those searching for opportunities?

For one, launching a career in the outdoors doesn’t have to be as drastic as moving across the country. If I were talking to a student on campus who maybe wants to do something like I did, I would say sure, there are tons of opportunities out there, but there are also a lot of local options as well. We often overlook what’s being offered locally because we don’t really know home the way we think we do.

It wasn’t until I got to Minnesota that I realized just how many state and national parks there are in North Carolina which I had never visited. All of these places have internships and summer work opportunities. There’s just this abundance of resources as well as recreation/environmental jobs at the state and local level that a lot of people don’t necessarily give the time to. So, [we could benefit from] changing the mentality that outdoor careers require some radical life change. Especially in the current times, where we can’t necessarily move around the way we want. I would say start locally and go from there.

"We often overlook what’s being offered locally because we don’t really know home the way we think we do."

In lieu of recent events, there’s been a surge in highlighting outdoorists of color. What do you make of this as a Black person who has real experience in the industry?

From getting my start in 2013, I realized just how white the outdoor industry was. I rarely saw anyone who ever looked like me other than the one other Black guy at my office, and when he left, I became the only Black guy. I started to realize that all these companies weren’t set up to bring on people of color and keep them.

So I’m now interested in these conversations about how companies will start recruiting talent from HBCUs and other predominantly Black spaces.

Is that a goal you had in mind when starting HBCUs Outside?

HBCUs Outside was a response to what I personally went through in Minnesota. Not that anything traumatic happened, but it was obvious that the only time I saw other Black people was when we physically went to those communities to provide services and programs. There were very few people of color on the side I was on—those of us helping to serve and offering outdoor experiences.

By the time I returned to college in 2015, it hit me that there were no outdoor resources at my school, which was one of the reasons why I left in the first place. After doing some research, I found that there were hardly any opportunities for outdoor recreation being offered at most historically black institutions. So I came up with this idea to bring resources to these schools which would promote general wellness and help combat the issues that commonly plague the Black community.  There are other organizations like Soul Trak Outdoors and Greening Youth Foundation which are doing the same kind of work, and I’m also trying to support them and get these programs into more universities.

HBCUs Outside is now becoming a digital platform that brings all the different aspects of the outdoor industry together onto one site for students and faculty to use. Students seeking job opportunities with companies like REI or The North Face will know where to go to find that information. They’ll know where to go to find local hikes or Black hiking groups in their area. It’s basically becoming a community where those with an interest in the outdoors can go for answers.

In what ways has outdoor exploration impacted you as a person? And how does this affect your vision for the future?

This year the word for me is intentional. I am much more intentional about the path I choose and the things I decide to engage in. The term basically falls under the umbrella of mindfulness. The outdoors has taught me to be an extremely mindful person, whether you’re on a trail or whitewater rafting, and to be aware of the hazards and potential dangers you may encounter, especially while leading others.

If there’s one thing I’ve taken away, it’s listening with your heart. Rather than immediately offering suggestions or advice, I’ll truly try to find a way to understand someone. It all goes back to being mindful, and it has helped me reach a different level of understanding of not only my needs, but the needs of those I’m with.

Ron Griswell has connected underserved communities to the outdoors through starting HBCU's Outside; he's a former camp ambassador for Outdoor Nation, and a former NextGen Trail Leader with the American Hiking Society. Follow Ron on Instagram @rongriswell.

Q&A with furniture maker Heather Scott on building by hand, finding inspiration in art, and drawing influence from the land

A Q&A with the founder, designer, and maker of the London-based upstart making tote bags and more from vintage techwear

All You Need to Know to Build Yourself an A-Frame Cabin for $8,000

The Father of Adventure Travel Says to Protect We Must Explore

The MT Sobek co-founder discusses 50 years in the travel business, the call of wild places, and the big-picture problems of travel on a choking planet

The outspoken artist on shooting nudes, how to explore without a colonialist mentality, and the ongoing fight against social media creeps