End
Back to article
https://www.fieldmag.com/articles/she-surf-book-by-lauren-hill-review-gestalten

“She Surf” Is The Unexpected Anthology Women’s Surfing Deserves 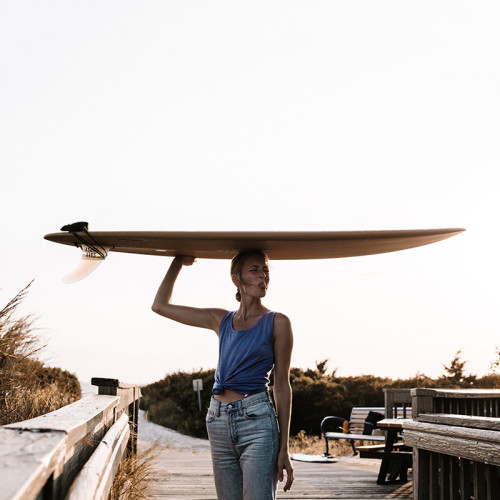 @dirtbagdarling
Johnie is a writer, photographer, storyteller and waterwoman exploring the connection between people and the planet
https://www.fieldmag.com/articles/she-surf-book-by-lauren-hill-review-gestalten

The first documented wardrobe malfunction in surfing can be credited to none other than best-selling novelist Agatha Christie. Writing from her stint exploring one the British Empire’s colonies in the 1920s, the queen of mystery wrote: “The second time I took the water, a catastrophe occurred. My handsome silk bathing dress, covering me from shoulder to ankle was more or less torn from me by the force of the waves. Almost nude, I made for my beach wrap.”

Unreliable swimwear is something every female surfer can relate to. Since the advent of the bikini (the now-ubiquitous design created in 1946, by a man, and named for the nuclear testing site Bikini Atoll), not only are female surfers expected to be proficient in the water, but sexy, too—an absurdity surfer Lauren Hill poked fun at in her short film “Pear Shaped.”

Hill’s newest project, She Surf-The Rise of Female Surfing, is the product of a decade-long pursuit for more equitable media coverage in women’s surfing and documents the culture, history, and icons of women’s surfing—along with the surprisingly evocative aforementioned relationship between swimwear and sport.

The 256-page, stitch-bound hardcover, published by Gestalten, is a beautiful and surprising examination of the intersectionalities of surfing, environmentalism, and gender that sidesteps what might be the least interesting lens through which to view it: in comparison to men’s surfing.

“Surfing culture has become more inclusive over the last decade, and thankfully we’ve largely moved away from hyper-sexualization as the norm for representations of female surfers,” Hill told me. “[But] surf media has really lagged on fully integrating women into the fold of men’s media—it’s still very rare to see a woman on the cover of a mainstream surfing magazine.”

Women’s voices have often been omitted from surf history books, magazines, films, and documents, informing a flawed modern perception of what surf culture looks like. If you think the quintessential surfer is a white, heterosexual, middle-class male, you’re actually thinking of the exception to what surf cultures have looked like over the long arc of history, not the rule, says Hill.

“The most impactful section for me, personally, was researching Polynesian mythology and lore, where women were celebrated as some of the most adept surfers and more than two genders were acknowledged,” she says, emphasising that this reminder serves as an impetus for swinging the sport back toward a “legacy of inclusivity.”

She Surf is a substantial addition to the outdoor adventure library, not quite as behemoth as most coffee-table books, but still heftier than your average hardcover—a conscious design to allow space for its photos and stories to breathe.

"I wanted to include women who were both technically proficient surfers and who have used surfing as a tool for making change in their own lives, communities, and in the world at large."

Among the 26 female surfers profiled in She Surf are stories on indigenous medicine women and Polynesian royalty (“The Abundant Roots of Women Surfing”), the women who fought for equal pay on the competitive circuit (“The Founding Mothers of Professional Surfing”), and the influence of 90’s pop culture on the sport (“Blue Crushing It”). The book’s imagery rides the line between showcasing the diversity of who is surfing and lovingly capturing high technical skill across a variety of crafts and waves. Hill says that showing ability was her first priority, and she fleshed out the rest from there.

“I wanted to include women who were both technically proficient surfers—and had the imagery to show that—and who have used surfing as a tool or lens for making change in their own lives, communities, and in the world at large,” she says. “This book is really about women’s surfing, as opposed to the girlish representations that have prevailed.”

Considering the current pressures small businesses are under, Lauren Hill and Field Mag would like to encourage readers to buy She Surf from local bookshops. Bookshops can order this book directly from Gestalten, where a sticker price hovers around $50.