A Local’s Guide to Trad Climbing in Yosemite National Park

A rundown of cams, nuts, anchors, leaders, and more in the context of climbing Central Pillar of Frenzy, a Middle Cathedral Rock classic 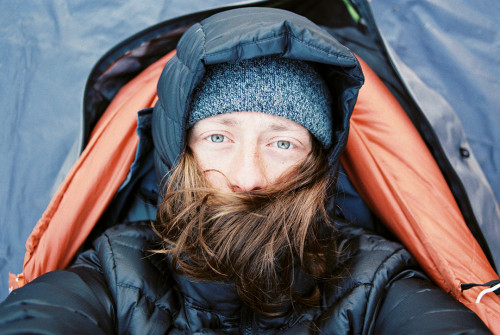 @andrewmupchurch
Andrew Upchurch is a film photographer living and working in Yosemite National Park as a hiking guide for the Yosemite Mountaineering School.
https://www.fieldmag.com/articles/guide-to-trad-climbing-yosemite-national-park

Five hundred feet of vertical granite is difficult to resist. Climbing is a bug. It’s the greatest addiction I know—a constantly nagging pull in my mind that never lets up. Luckily I live in Yosemite National Park, where this addiction is not only commonplace, but encouraged.

Despite warm weather presenting more of a challenge for climbing (heat lessens amounts of friction and gripping potential due to sweaty hands on warm, slippery granite), my coworker and I recently decided to hit the walls of Yosemite amid the smoky haze of nearby wildfire. Our objective? An old Yosemite classic located on the Middle Cathedral Rock called “Central Pillar of Frenzy.” It was hard not to be thrilled at the prospect of ascending hundreds of feet up a cliff directly across the valley from the legendary El Capitan (the site of Alex Honnold’s world famous free solo and Tommy Caldwell's epic Dawn Wall ascent, of course).

The process of ascending 500 feet (or more) up sheer vertical cliffs like these is highly involved, not to mention dangerous. Because of the risk factor, climbing protection for taller climbs tends to employ incredibly strong ropes, harnesses, carabineers, and other protective equipment like camming devices, called “cams,” and small metal wedges, called “nuts” (see photo of gear). This equipment is meant to minimize the risks of climbing. When placed in a constriction in a crack in the rock correctly, these devices can often hold the weight of a car—assuming the rock doesn’t break. That said, danger remains a constant. Sometimes climbers can follow every necessary safety measure and something may still go wrong.

Welcome to the world of “trad” climbing. Where it pays to be over prepared and plenty optimistic.

"Welcome to the world of “trad” climbing. Where it pays to be over prepared and plenty optimistic."

Trad climbing routes—meaning “traditional”—often rise higher than a single length of a rope—routes of which Yosemite is well known for. If we are talking about something like El Capitan, we mean 3,200 feet. That’s nearly three Empire State Buildings stacked on top of one another, a scale nearly impossible for one to wrap their head around, even as a climber. Within Yosemite National Park’s 1,169 square miles, countless numbers of these types of climbs exist.

In order to climb a route like the one we had selected for the day, a pair of climbers will climb the full routes in shorter, approximately rope-length sections. A single section is called a “pitch.” The first climber up a pitch is called the “leader.” The lead climber ascends a pitch, placing their aforementioned protective gear along the way and clipping the rope that is tied to their harness through carabineers that are attached to the protective gear. They then climb higher to reach an appropriate stopping point where they create some form of an “anchor” system that is used to protect the following climber—called, unsurprisingly, the “follower”—as they climb up to the top of that pitch to meet the leader.

During their climb upwards, the follower removes the protective equipment placed by the leader and attaches it to their own harness, preventing any gear from being left behind. This process is then repeated upwards through as many pitches as a route demands until both climbers complete the route—or “bail”, by descending off the route prior to reaching the top. This system of climbing protects both climbers in the case of a fall.

Pure trad climbing involves no gear or anchors permanently fixed to the rock, nor any gear left behind. It’s L.N.T. compliant climbing.

With this system in mind, my buddy and I set out on our own personal Frenzy. Pitch one was weird and awkward, with climbing that was not very obvious or straightforward. It would not be a stretch for one to say that it was the “opposite” of gym climbing. As I led this first pitch, I had to strain myself to carefully find hidden constrictions and holes in various meandering cracks in the rocks in order to keep my balance.

Pitch two was challenging in all the best ways but took some time for us to get used to than expected. Naturally, this pitch later became one of the more memorable parts of the entire climb.

The third pitch involved a form of climbing that many climbers hate with a passion—offwidth. Offwidth climbing usually involves a crack that is wider than the size of the maximum constriction one can make with a single human hand. As a result, a climber must use some combination of compressing two hands together (maybe in a double fist position or butterfly-like shape within the crack sending force from flexing their hands outward), shoving their elbow in the crack like a chicken wing, or using the palm of their hand and the outside of their elbow as if it were a crowbar to stem outwards against both sides of the crack’s wider spacing. Confused? Yeah, I was too when I first learned about this realm of climbing. As I said before, it’s a far cry from pulling color coded plastic holds in a gym.

After these time-consuming challenges, we had only managed to complete the first three of the route’s five total pitches by the time midday approached. So, we made the correct call to retreat off the climb in order to clock in for work on time.

We returned the following day with better familiarity of our route and a renewed fervor. The first three pitches were the “crux” pitches for us—the hardest of the total route. But experience was on our side this time and they flew by in minimal time. The last two pitches were comparatively smooth sailing too, involving a bit more easier offwidth climbing on the fourth pitch and an even easier fifth and final pitch.

Pitch five was the longest, tallest pitch, the one that really allowed me to relish the aesthetics of our climb. I remember cruising along it with an epic euphoria, placing my hands and feet carefully, confident we would make it to the finish before work. We were nearly 500 feet off the ground, with plenty of air and exposure around us, feeling stoked and high on life. What a bizarre and beautiful feeling.

The first day’s “preparation” had paid off as we reached the end of our route on top of Middle Cathedral Rock’s Central Pillar with plenty of time to spare before rappelling back down and heading to work. As we stood on a small 4’ x 4’ rock ledge on the summit of our climb, we were reminded of why we put up with all the hard work and effort required to make a climb like this successful. There is no feeling we crave more than savoring the flow of moving across a vertical ocean of rock.

When I think about it, I can still smell the smoke in my nostrils from that day.

This is Yosemite climbing.

How the "Rhodey Loadies" put "the Woods" on the map, and why it deserves a place on your northeast rock climbing bucket list

How Nature Photographer Gina Danza Created a Life of Epicness

We talk with outdoor enthusiast @wildgina on her path to working in the outdoor industry, increasing Black representation in nature, and much more

A Product Designer's DIY: How To Make Your Own Face Mask at Home

A step-by-step guide on how to make a DIY mask using an old t-shirt and climbing rope, as detailed by designer Adam Kingman

All the beta you need to send your project and not bail at the crux, wether in the bouldering gym or at your local outdoor crag