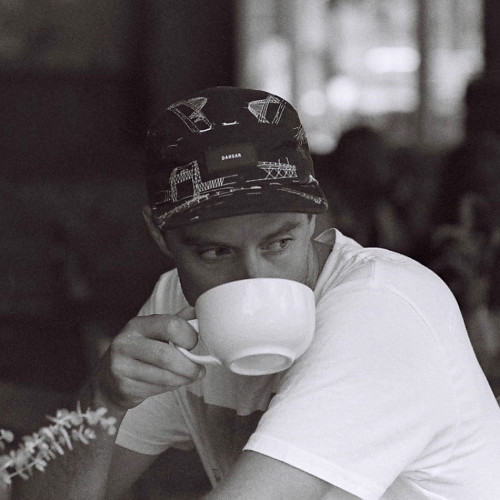 @ericgreene
A Vancouver, BC native now living in Brooklyn, Eric is a surfer, photographer, writer, and former editor of both King Snow and Later Mag. He rips.
https://www.fieldmag.com/articles/australia-southern-coast-road-trip-35mm

Australia is a big place. You don’t really grasp the immense scale of everything until you leave the city and hit the road, where hours tick by from A to B with little but the expanse of nature in view.

I’ve spent a decent amount of time in Australia (I also live in Brooklyn and interact with Australians daily), but I hadn’t previously been to Melbourne. So my wife and I went to visit a couple close friends. Lucky for us, these friends were generous enough to lend us their 1985 Toyota Land Cruiser (manual, diesel). When they clocked into work Monday morning, my wife and I hit the road.

"It was not the world’s greatest adventure—countless have driven the same route we followed—but it was new to us."

The southern coast is a remarkable region—isolated, remote, and lined with an endless coastline of lonely beaches. It’s a place where you cross paths with so few people that you make a point of stopping to speak with all those you pass. Having such a conversation starter rig didn't hurt the cause either.

The Great Ocean Road begins to the southwest of Melbourne, just past Bells Beach. It draws a steady stream of tourists, but aside from the few sporadic beach towns stretching along the coast, it’s a wild and uninhabited landscape. Much of the area is national park land with designated campgrounds, where you can post up for the night in a rustic site with enough space for a tent and a communal faucet of unfiltered water—all you need.

The southern cape is a dense habitat with all the crazy wildlife you’ve heard about Australia. We drove the Cruiser down a long gravel road somewhere in Cape Otway that was overrun with short, fat, black kangaroos that I later learned were, in fact, wallabies and not kangaroos at all. There were dozens of koala bears (also fat) sleeping in forks of tree branches and tropical parrots singing from the canopy. Such a nature overload raises concern for venomous snakes and spiders though, so we slept above ground each night in the back of the rig.

At the west end of the Great Ocean Road, nearing the border to South Australia, are the Twelve Apostles. The most fascinating aspect of this world wonder is the absurd amount of tour buses it draws to the middle of nowhere. It’s a stunning view, but a hilarious experience of navigating an overcrowded sidewalk of rogue selfie-sticks atop the edge of the world.

"There’s an undeniable satisfaction in being out of service in a 30-year-old truck without the modern resources we’ve come to depend on."

For several days we explored indistinct trailheads and remote beaches at the ends of dirt roads, while frequenting tiny towns to find drinkable water and public showers. I surfed in the strangest places braving frigid, cold water beneath sun-scorching heat. We boiled coffee on the sand at sunrise, prepared dinner on the tailgate of the Cruiser at sundown. And we drove.

Living in a world where everything is immediately accessible and within reach, there’s an undeniable satisfaction in being out of service in a 30-year-old truck without the modern resources we’ve come to depend on. I have an admiration for the few people we encountered who live that lifestyle daily.

As for these photographs, to me, they represent that idea of a past time spent on the road, where I experienced a new place, took some pictures without the luxury of a digital screen, and viewed what I captured weeks later after developing the film back home in New York.

These Minimalist Cube Cabins Bring Community to the Outback in Tasmania

This Tiny Off-Grid Hideaway Is a Minimalist's Dream

Off the coast of southern Tasmania, the bright and airy cabin is as secluded as can be